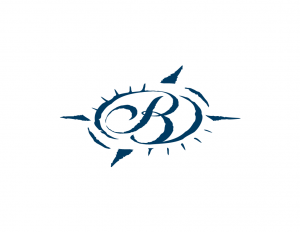 Below is an article written by Bayside resident, Christina Weaver, from the Coastal Point newspaper on June 22nd, 2018. Christina wrote about her trip with Jennifer Idzi and Bayside Institute to Smith Island. 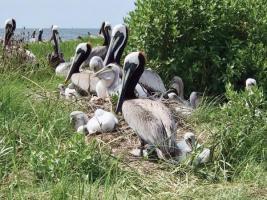 By Christina Weaver
Special to the Coastal Point

Special to the Coastal Point • Christina Weaver: The northern most breeding colony of pelicans in the eastern United States is located on Smith Island in the Chesapeake Bay. Delmarva Birding Weekends organizes a day-trip to the island to view the bird population and learn about the local wildlife.Smith Island sits in the middle of the Chesapeake Bay. It is a day-trip away. It’s a visit to a back-in-time way-of-life. And, in the summer, it almost seems like a window to Jurassic Park.

Robert was referring to brown pelican chicks whose parents have formed part of the northernmost breeding colony in the eastern United States. The pelican colony, intermingled with families of double-crested cormorants, is situated on an island clump of marsh on the periphery of Smith Island.

Hundreds of pelicans, wearing their distinctive breeding plumage, make a wondrous and memorable scene. They were caring for chicks of all stages of growth and took no notice of fascinated interlopers peering at them from skiffs. And, back and forth, adult pelicans would fly in with full beaks of regurgitated fish — the perfect food for their offspring.

“Let’s just sit here for half an hour or so and take it all in,” said Jim Rapp.

And that’s just what a group of participants with Delmarva Birding Weekends did. They sat quietly, took lots of photos, listened to the gentle lap of water and had their questions answered. For one, it was the fulfillment of a bucket-list wish.

Taking the time to relish the whole experience is time built into Rapp’s schedule for the day.

“Our goal is not to get as many people in and out of Smith Island as quickly as possible,” said Rapp. “We want them to develop a bond with the island, meet some of the residents whose families have lived there for centuries, visit the small towns of Tylerton and Ewell, experience the cuisine, see and hear unfamiliar shorebirds, and return on time to the mainland, feeling their money was well-spent.”

Rapp is co-principal, along with Dave Wilson, of Conservation Community Consulting (CCC) based in Berlin, Md. Together they have around 50 years of experience in wildlife, conservation and nature tourism. Rapp, for example, was the former director of the Salisbury Zoo, and Wilson was the executive director of the Maryland Coastal Bays Program.

Delmarva Birding Weekends is one of the programs offered by CCC. The day-long Brown Pelican Colony/Smith Island excursions, as well as its three-hour Sunset Seabird Safaris, are scheduled throughout the summer, and early registration is advised. The next opportunities to see the nesting brown pelicans with them are Thursday, June 28, and Friday, June 29.

It takes about an hour and a half to drive from Ocean View to Somers Cove Marina in Crisfield, Md. That’s where one meets the professional bird guide from Delmarva Birding and is introduced to the captain of the Barbara Ann II. The boat ride to Smith Island takes about 45 minutes. Each trip’s departure time varies according to the tide, due to the shallow waters surrounding the island.

Apart from seeing the pelicans, another highlight of the trip is lunch (included in the registration fee) at Tylerton’s only restaurant and store, Drum Point Market. Owned by Duke Marshall — whose family was amongst the first settlers on the island 400 years ago — the front porch-style restaurant has received rave reviews from Food Network and Coastal Living magazines.

The crabcakes — made with crabs caught hours earlier — and the famous Smith Island cake made by Marshall’s mom are the best. In fact, the opportunity to actually watch Mrs. Marshall making the specially-ordered cakes in her kitchen is an added bonus.

Promptly, according to the schedule, one arrives back at the dock in Crisfield, happy and exhausted from an active, wind-blown day.

For the Sunset Seabird Safaris, Delmarva Birding, along with seasoned boat captain Brad McCabe, offers trips in the bays behind Ocean City, Md., and Assateague Island. From the boat one sees nesting herons, egrets and glossy ibis, as well as migrating shorebirds, state-endangered royal terns, black skimmers and many more. The tour departs from the West Ocean City Harbor boat ramp.

Some of the participants in Delmarva Birding Weekends are serious birders who come equipped with all the gear. But this is not necessary. All that is asked is to enjoy nature, be interested in learning more about conservation and show respect for the environment in which our amazing local birds live and breed.

“Dave and I saw a change in America’s conservation culture,” said Rapp. “It used to be hunters and sportsmen who primarily supported nature conservation through the purchase of duck stamps. The trend now is for people who just want to connect with nature, take photographs, go kayaking and learn from professional naturalists.

“We are offering small boutique experiences that are memorable for the participants and economically helpful to the charter-boat and skiff captains, watermen and restaurant workers. We make sure there is enough time for people to visit the museum in Ewell and the church in Tylerton. We want Smith Islanders to see us as guests who are grateful for giving us a glimpse into their unique way of life and the beauty and fragility of their surroundings.”

Jennifer Idzi is the coordinator of the Institute, a learning center for residents in the community of Bayside in West Fenwick. A small contingent of Baysiders joined a recent Brown Pelican/Smith Island expedition.

“Both Dave and Jim have come to Bayside to conduct birdwatching walks in our community,” said Idzi. “They are very professional to work with, and so nice and friendly. When they told me about the opportunity to see a pelican colony, I knew we would be interested, but I didn’t realize just how extraordinary the day would be. One of our group said it was one of those life experiences she will never forget.”

More Delmarva Birding tours are scheduled in June, July and August. The registration fee for the Brown Pelican Colony/Smith Island tour is $185 per person. The Sunset Seabird Safari costs $75 per person or $400 for a group of six. To learn more Conservation Community Consulting, Delmarva Birding and to register, go to www.delmarvabirding.com.