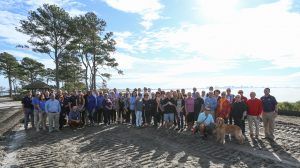 Naming the amenity was a community-wide effort, and name suggestions by members were taken for weeks before the final name was chosen: 38°. In 1751, a line was surveyed straight across the Delmarva Peninsula, called the Transpeninsular Line (at approximately 38°27′ N), the eastern half of which forms the north–south border between Delaware and Maryland. After research into the rich history of this discovery, Carl M. Freeman companies felt 38° provided the most significance.