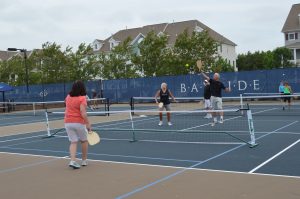 If you’ve ever been to the Sun Ridge Tennis and Recreation Center, you may have noticed the smaller nets that split one half of the tennis courts. What are they for? They can’t be for standard tennis can they? No! Bayside is home to a great game that has swept our community in popularity: Pickleball. What is this game and how do you play it? Read more to find out about this game!

Pickleball was invented in 1965 on Bainbridge Island, close to Seattle, WA. Three dads created the game when their kids were bored with the typical summer activities. Originally made with hand-made equipment, the game has grown over the years to become a popular sport all over the world!

Pickleball is a paddle sport that anyone can pick up and play. It’s been described as a combination of tennis, badminton and ping-pong. Typically, it’s played with a plastic paddle slightly bigger than a ping-pong paddle and a plastic ball that’s similar to a wiffleball. A Pickleball court is about the size of a doubles badminton court but it can be played on a tennis court.

The rules of the game are similar to badminton and can be played either as doubles or singles. The server hits it underhand to their opponent in the opposite box. It must bounce once before it is returned. After it bounces once on both sides of the court, then you can return it however you like. The serving team can score if the ball bounces twice. The first person that scores 11 points wins and you have to win by 2.
You can find a more in-depth rule summary on the USAPA website.

Pickleball is a very popular sport at Bayside. It’s a fun way to get some exercise and pretty much anyone can play it! Find out more of the fun things you can do at the Sun Ridge Tennis and Recreation Center on our website!