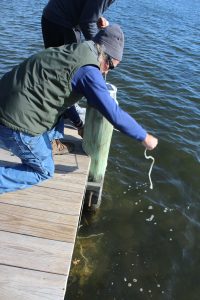 Bayside Institute joined forces with the Delaware Center for the Inland Bays to bring oyster gardening to The Point at Bayside. Little did I know two years ago (when I was interviewing to become the Bayside Institute Coordinator) that I would one day be the volunteer captain for fostering oysters! How hard can it be, right? Well it’s pretty easy other than I feel a tremendous amount of responsibility to grow these oysters successfully and safely. This has already been put to the test!

A quick recap of the program before I get to the mishap – the Delaware Center for the Inland Bays began the Oyster Gardening initiative began in 2003 and now has over 120 sites like ours. At each site, baby oyster (called spat) and juvenile oyster are kept in baskets to grow in a safe place until they are mature enough to be deposited on the rip rap already established in the inland bays. They float in the warmer months in a Taylor Float, the white 2ft x 3ft PVC float you see attached to the pier at The Point. It is incredibly important to note that these oysters are not safe for human consumption. Oysters filter up to 50 gallons of water per day, and a viable population in the bays will lead to clean water, marine habitats, and more! You can read all about the program here: http://www.inlandbays.org/projects-and-issues/browse-all/oyster-gardening/

Now, back to the tremendous responsibility that has already been put to the test. When we first received the oysters, the Inland Bays team lowered them in to the water last November in their baskets to keep them safe and sound through the winter while they were dormant. I checked on them on a warm February day to find one of the baskets completely empty. Fearing I had already failed at providing a safe place for the oysters to grow, I just had to figure out a way to get the oysters back. My hope was the oysters had merely tipped out through the nor’easters we experienced here this winter. I didn’t think anyone would take such small oysters, especially those that were part of a restoration project. The last thing I wanted to do was to report a missing basket of oysters before summer began!

About a month ago, Levi Dodge and I set out to see what we could find with big boots, crabbing nets, clam rakes, and towels. Sure enough, as we scraped the bottom over and over, we recovered nearly the entire basket of oysters! I was thrilled that I did not have to report a missing basket of oysters to the program director Bob Collins, and that we were still able to clean the oysters as scheduled in April!