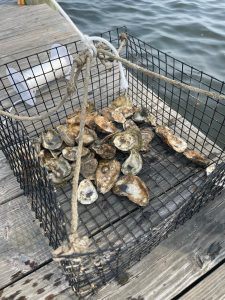 Bayside Institute will be participating in the oyster farming program with Delaware Inland Bays.

Oysters are like the building blocks of the benthic community and create very important reef habitats for other organisms. Some of the many important species you will find around an oyster reef include: barnacles, mussels, bryozoans, worms, algae, plankton, as well as several kinds of fishes and crabs. The oysters that are growing at The Point are not meant for harvest but for creating more reef habitat. Oysters are also filter feeders; they can remove tiny one-celled plants called phytoplankton and other small particles from the water and improve water quality.

On September 14th, 2021 the Delaware Inland Bays put in a cage of oyster larvae at the Point pier, and it will be picked up in the spring. The cages allowed a good supply of food and oxygen to reach the oysters near the surface. They also reduce the threat from predators and sedimentation.

The cages and floats make it easy for the volunteers to maintain the oyster garden populations. The goal is to provide the juvenile oysters a protected environment which will result in more successful survival rates.

The juvenile oysters, known as “spat-on-shell”, come from a disease-resistant line of larvae produced at the Rutgers University Haskin Shellfish Laboratory.

“Spat” are tiny free-swimming larval oysters that attach themselves (in the tens to hundreds!) on spent oyster shells, also called “cultch”, collected by the Center’s “Don’t Chuck Your Shucks” shell recycling program, at the University of Delaware’s College Earth, Ocean and Environment’s campus in Lewes. The “spat” are then transferred to the wire inserts, which are placed inside the Taylor floats.

We look forward to showing you the progress in the spring! 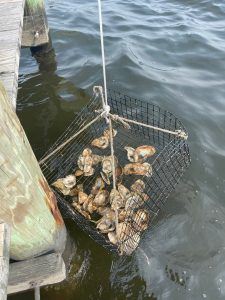 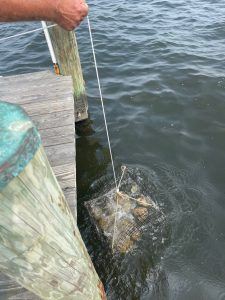