McDonald’s is Coming to Bayside Marketplace 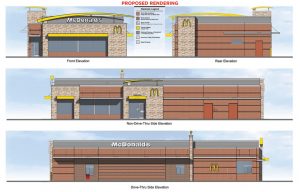 Carl M. Freeman Companies announces the finalization of a deal to bring McDonald’s to Bayside Marketplace. The deal completed on December 3, 2014 and the restaurant is under construction. The site is located on Lighthouse Road just south of Americana Parkway.

“With this transition finalized, we have made all of the land improvements planned for this phase of Bayside Marketplace,” according to Chris Garland, Senior Vice President of Development with Carl M. Freeman Companies. “This finish to the year complements the CVS pharmacy we just opened in November,” he added.

McDonald’s is the world’s leading global food service retailer with more than 35,000 locations serving approximately 70 million customers in more than 100 countries each day. More than 80% of McDonald’s restaurants worldwide are owned and operated by independent local businessmen and women.

The restaurant operator, Mike Meoli, operates several restaurants in the coastal area. At approximately 4,500 square feet, the restaurant will feature the latest prototype contemporary arcade style restaurant, which features brick and stone facade offering visual interest with varying wall depths, textures and colors. Additionally, the new restaurant will include sustainable features such as LED lighting throughout, a bike rack, white reflective roofing and high efficiency equipment and will be the Eastern Shore’s first McDonald’s featuring the new fast forward drive thru service. When the McDonald’s opens in the spring season, 50 to 70 local residents are expected to be employed.

For more than 67 years, the Carl M. Freeman Companies has created innovative and inviting places to live, work, shop and play. The company has developed and managed more than five million square feet of commercial space for shopping center and office use, servicing more than 1.1 million square feet of retail; built award-winning beachfront and golf course communities; and developed more than 20,000 homes in 50 residential communities across Delaware, Maryland and West Virginia. The Carl M. Freeman Companies is headquartered in Rockville, MD with a complementary office in Selbyville, DE.

For more information about Carl M. Freeman Companies and their diverse interests, visit www.freemancompanies.com or call (240) 453-3000.