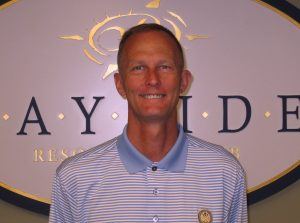 Robert Crowther has dedicated nearly thirty years of professionalism, player development, and finesse to the golf industry on the Eastern Shore. Robert served in the United States Marine Corps from 1979 to 1985. Following the Marines, he began his career in golf as the Assistant Golf Professional at Whiteface Resort Golf Club in Lake Placid, New York and then at Meadia Heights Golf Club in Lancaster, Pennsylvania. In 1990, Robert’s journey as a golf professional led him to the Eastern Shore where he accepted the position as PGA Head Golf Professional at Cripple Creek Golf & Country Club in Dagsboro, Delaware. There he was responsible for overall golf operations and services of the private facility for fifteen years. In 2005, Robert accepted the opportunity to be the Director of Golf/PGA Head Golf Professional at Jack Nicklaus Signature Golf Course, Bayside Resort Golf Club in Selbyville, Delaware. He had the pleasure of opening the course alongside Jack Nicklaus and Joshua Freeman, CEO of Carl M. Freeman Companies. Since its inception in 2005, Bayside Resort Golf Club has been named the #1 Golf Course to Play in Delaware for 12 consecutive years. Throughout his career on the Eastern Shore, Robert has been recognized with several prestigious awards including Coastal Style Golf Professional of the Year 2016 & 2018, Golf Digest Top Teachers in State 1997 through 2014, and President’s Council on Growing the Game 1993, 1994, 1997, 2001 thru 2013.

In addition to these awards, Bayside Resort Golf Club has awarded Robert with the Hammer Award recognizing his dedication to teamwork among the staff, and his exceptional customer service to heighten the guest experience. He welcomes and encourages anyone who has an interest in playing golf, from their first time on the course to the leisure player to the players who rival his abilities. As part of a life-enrichment program at Bayside Resort Golf Club, Robert leads behind the scenes tours of the course so members can familiarize themselves with the history of the course, the operational logistics in maintaining the course, and tips, rules and etiquette to keep in mind while playing. Robert actively teaches private lessons and holds clinics each week in-season for Bayside members.

Under his leadership, Robert has nearly the same returning staff each season, providing a consistent exceptional experience to members and return golfers alike. Robert is an accomplished professional, and extremely educated in golf with over 400 hours of continuing education from the PGA, Troon and USGA.