Bayside Institute Goes to The Nutcracker 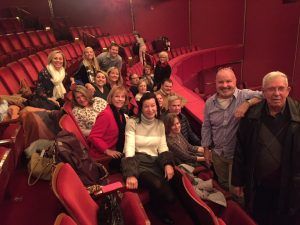 Visions of sugar plum fairies have been dancing in my head since seeing the Sunday matinee of Ballet West: The Nutcracker! Fifteen members, Kellie Pitts, Director of Membership, Sean Gradomski, General Manager, and myself met at the Welcome Center to board the bus at 7am, heading to the John F. Kennedy Center for Performing Arts. After an almost three hours bus ride, we pulled in to The Kennedy Center, just after the doors opened for the day. We were some of the first guests in the Welcome Center that morning.

We met our tour guide, Brian, for a private tour of The Kennedy Center where we were able to access many places not typically shown to a public tour. The Kennedy Center touts itself as a living memorial – more than just a monument, the performing arts for all is what honors John F. Kennedy’s memory. Learn more about its’ history here.

What was quite spectacular was the contributions from allies around the world that have made The Kennedy Center what it is today. The white Carrara marble that welcomes you in the Hall of Nations and the Hall of States, was a gift from Italy.The stunning chandeliers in the Opera House were a gift from Austria. The African room, a reception space for dignitaries, was a gift from Africa and includes stunning tapestries and calabashes, and wooden doors carved from a 700-year-old tree. France and Spain donated artwork, among many other countries, the building is simply stunning, and to be in a place where all of America’s allies have contributed to it’s beauty is awe-inspiring.

Next came a much needed break for lunch and the best chocolate chip cookies on the other side of the bridge!

With a little time to spare, members wandered through the building, tickets in hand, stopped in the gift shop, then found their seats in time for the 1:30pm matinee.

The Nutcracker performance was spectacular. Our seats in the first tier enabled us to see the stage and the orchestra pit. In a hall with 2,364 seats, all but a couple seats filled, the places was silent except for the soft thuds of the dancers feet on the stage. Between the quiet sounds of their feet tapping, the sparkles of the costumes, and the live orchestra, the performance was unforgettable.