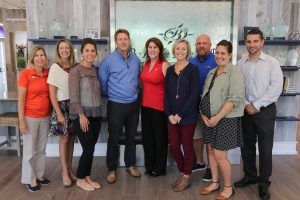 On Saturday, September 16th, Bayside bustled with activity that included events such as: Links to the Bay 5k, the Joshua M. Freeman Foundation Golf Tournament, the Black & Tan Celebration, Dive-In Movie at The Health & Aquatic Club and more. Sean Gradomski, General Manager of Bayside Resort Golf Club, decided to donate his pay for every hour he worked that day to the American Red Cross in support of recent hurricane relief efforts. Sean invited members of Bayside, who wanted to help with these efforts, to donate $5 for every hour he worked that Saturday as well.

The generosity from the Bayside members was outstanding! Through the collective contributions, Sean was able to raise $160.00/hour for a total of 18 hours. Flat donations were also made at a total of $1,315.00. Additional donations were also given. On October 25th, the Bayside team proudly gave the American Red Cross a total donation of $5,090.00.

Bayside would like to thank the following individuals/families, in no particular order, except by submission: