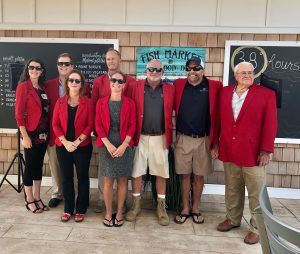 On October 4th, the annual Hammer Awards were held at the 38 degrees. Bill “Hammer” Hamilton was a guiding force for Bayside and the Carl M. Freeman Companies from 1999 to his death in late 2012. As the Director of Golf Operations, he worked with Jack Nicklaus and his team of architects to make the most of Bayside’s unique setting.

The Carl M. Freeman Companies instituted the “red jacket” as a tribute to Hammer’s love of the Masters and his beloved NC State, where he was a four-year letterman in golf and a lifelong Wolfpack fan.

Previous winners of the red jacket include:

We are thrilled to announce that the next recipient of the Hammer Award is Eric Hindes of Troon Golf. Congrats Eric on this well deserved award!