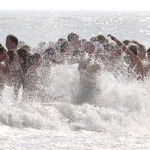 On January 1st 2013, a team of Baysiders courageously took on the icy, 34 degree water temperature for the 19th Annual Atlantic General Hospital Penguin Plunge.  This was Bayside’s 4th year to participate in the plunge, with 48 Bayside Plungers who signed up as team members and contributed to the cause.  For many Bayside Plungers, the Penguin Plunge has become a tradition, with both family members and friends joining in the effort.  Even with less actual bodies participating this year, the Bayside team exceeded last years efforts by raising a total of $4,450 in contributions for the Atlantic General Hospital in Berlin, MD.  Congratulations to those who participated in this event, and a big thank you to all who showed their support and generously contributed to this worthy cause!