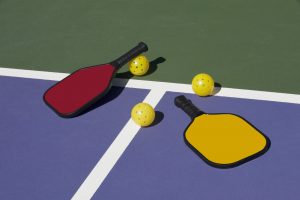 While Bayside is known for our Jack Nicklaus Signature Golf Course, or maybe our tennis courts, we also offer another sport: pickleball! If you haven’t played a game of pick-up pickleball at Bayside, the world of pickleball is most likely a complete mystery to you! Pickleball is about to become the most popular sport you’ve never heard of.

Unlike younger generations, Baby Boomers have long-appreciated this energetic yet low-impact sport for a number of reasons! The game of pickleball is essentially a combination of tennis, ping-pong and badminton. The concept of pickleball is rather easy to pick up, and the rules are easy to learn. But most importantly, pickleball is just so much fun!

In honor of warm weather, and the pickleball courts filling up once more, we decided to take a closer look at this increasingly popular sport, and discovered a few fun facts you may not know about pickleball:

1. Pickleball is One of the Most Popular Sports in the Country:
Today, pickleball is played all over the world—in fact, the USAPA recently estimated that over 400,000 people actively play this addictive game on a regular basis.

2. It’s Been Around for 50 Years:
Pickleball is celebrating its 50th anniversary this year, as it was invented in 1965.

3. It All Started With Three Men, a Few Bored Kids and a Dream:
Pickleball was first invented by three dads up in Washington state. They created the game as a solution to their children’s boredom during the summertime.

4. The Evolution of the Pickleball Paddle:
Initially, pickleball paddles were made entirely of wood, however in recent years, lightweight materials like graphite and aluminum have been incorporated to lessen the weight of the paddle. The typical pickleball paddle is larger than a ping-pong paddle, but smaller than a tennis racket.

5. Not Your Average Ball:
Unlike tennis or pingpongping-pong balls, pickleball balls have holes (similar to the holes found in Wwiffle balls).

6. Slower Than a Speeding Bullet:
Due to the inferior aerodynamics of the pickleball ball, (thanks to its large holes), pickleball balls travel approximately 1/3 the speed of a tennis ball.

7. The Best Picklers Are Never “Pickled”:
In pickleball, players are referred to as “Picklers”, and those who have lost did not “lose”, they have “Pickled”.

8. When in Doubt, Stay Out of The Kitchen:
The 7-foot non-volley zone directly in front of the pickleball court’s net is called “The Kitchen”.

9. That’s a “Dink” Shot:
The term “dink shot” is used when a soft shot narrowly arcs over the pickleball net and lands in the Kitchen (also known as the non-volley zone).

10. The True “Pickle” Behind Pickleball:
Pickleball was named after one of the inventors, Congressman Joel Pritchard’s dog, whose name was Pickles.

Looking to try this exhilarating, truly addictive new sport? Check out our events calendar to see when we offer pick-up pickleball!